The Super Bowl. It’s America’s sporting highlight, and advertising’s biggest stage. Not to mention most expensive. In 2012, a 30 second TV spot was going for a cool $4 million. And with that kind of price tag, most agencies go all-out to make the commercials as appealing, creative, humorous and talked-about as possible. Celebrities are a common inclusion; this year it included William Shatner, Matthew Broderick and Jerry Seinfeld.

But that’s the point. With those kinds of prices, brands and advertisers alike have started to look at creative alternatives. When you’re spending millions on advertising, it’s important to have engaging content across all the mediums your consumers interact with. First stop: social media.

The Super Bowl had it’s own hashtags like #SuperBowl and #SuperBowl46. So did the two teams participating. Thousands upon thousands of people followed the live play and commentary from the phones all around the world. Not everybody got the chance to watch it live. But everybody was able to know exactly who got hit, when they got hit, and how hard they got hit.

The New England Patriots have over three million Facebook fans. But the New York Giants are one of the most active teams in the world when it comes to social media. In the days leading up to the game, they had players film behind-the-scenes footage. But required 10,000 new Facebook fans to unlock the daily footage. Add to this a live video stream with fans where players answer questions from fans on Facebook, and it certainly created plenty of extra buzz and support.

Google really ramped it up this year. Both teams – the New York Giants and New England Patriots – had very active Google+ accounts. So Google decided to provide fans with lots of information to keep them occupied  – statistics, analysis, and streams of conversations for fans to say their piece.

Super Bowl XLVI is the first in history to be streamed live on the internet. This is a big deal. Especially when you revisit the cost of advertising. If millions of viewers are no longer switching on their TVs to watch the action, then why is the price tag still so high?

Lots of advertisers have actually started releasing their ads before the Super Bowl to generate discussion and awareness a little earlier. Millions of views are generated and so much content gets re-tweeted, Facebooked, blogged and shared around the workplace. Last year, Volkswagen’s “Darth Vader” commercial reached over 50 million views on YouTube. All the brands competing for attention have been looking to emulate that this year.

This is more of a post-game bonus. For those who have succeeded – and those who have failed miserably – this is where the magic happens. There is so much scrutiny surrounding Super Bowl marketing campaigns, that blogs are inundated with articles, critiques, thoughts and feelings before, during and especially after the game. There’s no hiding from it. If you want to be in the action, you have to cop the commentary that goes with it. 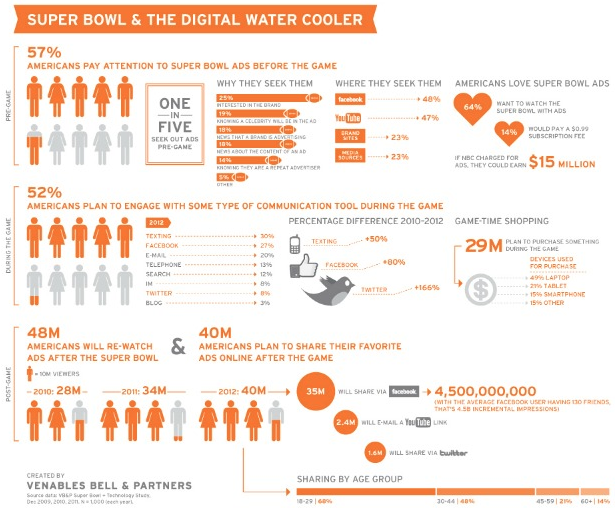 But brands need to make sure that they’re not doing it “just because”. They need to truly engage with their users and followers on a personal level. All the tools listed are now the new mainstream. Technology really is an amazing thing.

Follow us
E-Web Marketing
We’ve been in the digital marketing field for over 18 years and worked with hundreds of Australian (and international) businesses to grow their web presence. Specialising in SEO, search ads (PPC), social media, content marketing, email marketing and conversion rate optimisation.
Follow us
Latest posts by E-Web Marketing (see all)
<
>

We’ve been in the digital marketing field for over 18 years and worked with hundreds of Australian (and international) businesses to grow their web presence. Specialising in SEO, search ads (PPC), social media, content marketing, email marketing and conversion rate optimisation.

Get your 100% free SEO Analysis